In 1985 when I was 14, a terrible accident suddenly took my sight. As I laid there in the darkness, I thought about what I missed seeing the most. I focused on memories of my grandfather’s farm, and realized that what I missed seeing the most were the ANIMALS! Gradually over the next few months my sight returned, but only in one eye. That’s when I had my SINGLE VISION: to get moving and do what I can to save the animals I loved so much. What kind of world would this be without the Great Blue Whale, the Asian Tiger, or the lovable Manatee? Well, it’s happening… they are disappearing from sight at alarming rates. 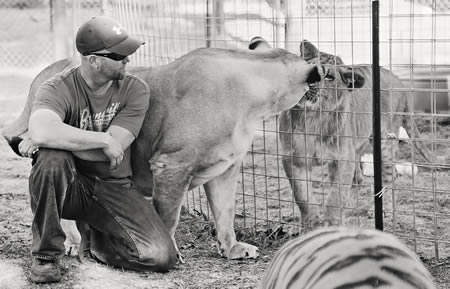 After graduating from Indiana University with a degree in Biology, my career began at Sea World in 1995. I spent several years studying animal behavior and educating the public about the endangered Sea Turtles and Manatees, and the tremendous pressures facing these beautiful creatures. Later, I accepted a carnivore keeper position at Jungleland Zoo and it was while working there that I met Janice, who introduced me to her three year old Bengal Tiger named “Chuffer.”

I immediately began volunteering my time to help them in any way I could. In our first introduction, this 600 lb. tiger walked up to me where I sat nervously on the ground, gave me a sniff and began licking my face with the roughest tongue I had ever felt. That was it. I was hooked! My fascination with big cats and my obsession to learn about them had begun.

Since that day, I’ve had the opportunity to learn from some incredible people and work with many amazing animals. Over the past years, I’ve lived with, cared for, and trained all types of animals including: Whales, Dolphins, Sea Lions, Manatees, Lions, Tigers, Leopards, Cougars, Orangutans, Chimpanzees, Wolves, Black Bears and more! My career path changed on July 1st 2005 when the offspring of the Tiger that sparked my passion were born. Janda, a three year-old Tigress gave birth to two cubs, the first arriving close to midnight and the second three hours later, following an assisted breech birth. A miracle had happened!

My company and this facility were constructed in memory of my grandfather, Eugene Weiler, who taught me to love and respect all animals, and was made possible by the Bovard family, who have always watched over and supported me.